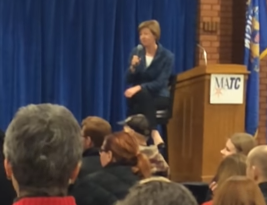 At a town hall Sunday, Senator Tammy Baldwin again could not explain her failure to act on information she received about the problems at the Tomah VA.  In 2014, Baldwin was contacted by a whistle blower and received an Inspector General report that detailed the prescription issues at the Tomah VA.  The whistle blower repeatedly reached out to Baldwin’s office imploring her to act on the information included in the report.

In August 2014, a young marine died as a result of mixed drug toxicity, in the 72 hours preceding his death he received 54 doses of 13 different drugs.  Since these events unfolded, Baldwin has been unable to explain why she and her staff failed to act.  Baldwin has also been unable to explain why she fired one staff member, Marquette Taylor, while retaining her chief-of-staff and demoting her state director.

While Baldwin’s refusal to come clean on her inaction is troubling, her duplicity on this issue is perhaps worse.  Baldwin’s colleague Senator Ron Johnson introduced whistleblower protections last session and Baldwin did not sign on.  She also stood by silently as her party’s leadership in the Senate held the bill hostage because Ron Johnson was locked in a tight reelection race.

This session, Baldwin is sending out press releases proclaiming her support for whistleblowers.  At the start of the year, Baldwin quietly left the Senate Homeland Security and Government Affairs Committee, the committee that will handle many of the bills addressing these issues.  Seems like a strange tactic for a member of the Senate that was truly interested in ensuring meaningful reform of the VA.

Baldwin’s initial failure to act and her self-serving actions in the aftermath of the Tomah VA scandal leave much to be desired for Wisconsinites and veterans everywhere.