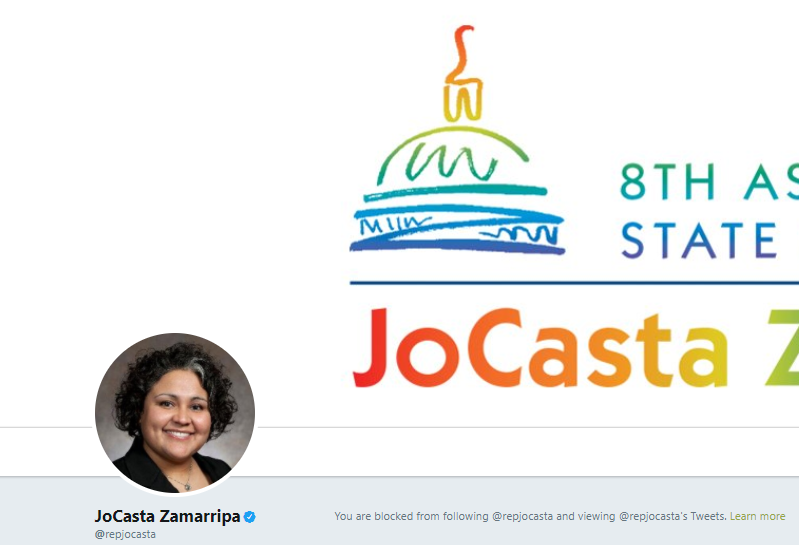 State legislators are busy people and in the case of State Representative JoCasta Zamarripa maybe so busy they don’t have time for the rules.  Still, doing political work in your state office is a big deal and that appears to be exactly what Zamarripa did on September 21, when she participated in a Twitter Town Hall organized by the Victory Institute for the purpose of recruiting LGBTQ candidates:

Ready for the #BiWeek chat with @VictoryInst and @glaad. pic.twitter.com/InXLP9yVNv

The Victory Institute is a political entity dedicated to training and electing LGBTQ leaders.  During the course of the town hall Twitter users posed clearly political questions like these:

Run out and #Proud. You can do it! #BiWeek #BiSexual #LGBT #Pride pic.twitter.com/6l6fBbLED4

No more "bi-erasure." We are here. We are #proud. #BiWeek pic.twitter.com/10PDICJsAl

And according to Zamarripa’s own Tweets she sat in her state office, at a computer tax payers bought, and participated in this candidate recruitment.  It’s also worth noting that Oregon Governor Kate Brown chose to use her political account on Twitter rather than her state account to participate.

These Tweets piqued our interest, so we filed a series of open records requests with Representative Zamarripa and the Assembly Chief Clerk to find out how this town hall was scheduled and whether Representative Zamarripa collected a per diem on September 21.  If this town hall had been schedule by her state staff there should have been a record of some kind that would have been turned over to us, but no such record was released to us.

In fact, in response to our initial request for any records pertaining to the Twitter Town Hall Zamarripa provided only hard copies of her actual Tweets.  A move that was puzzling until we realized she had blocked us on Twitter.

And while Zamarripa has since unblocked us, one has to wonder why this was her initial reaction.

A subsequent open records request for her calendar reveals that she did have other business in Madison that day, including a committee hearing and our request for her per diem payments is still outstanding at this point.

As additional records are released we will update the blog.